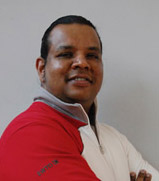 SiFu Kul Rai currently holds the grade of 3rd Technician degree in Leung Ting WingTsun system and also he is the head instructor of the Essex Region and serves directly under SiFu Damion James. SiFu Kul is directly responsible for running and promoting the EWTO - England organisation within the Essex region.

Si-Hing Kul has had a long-standing interest in martial arts. Like millions of other people the one and only, Legendry Bruce Lee sparked this love of Martial Arts. SiFu Kul's Father was a student of David "Ticky" Donovan OBE studying Ishin Ryu Karate. This was his first taster into martial arts. Like many others this was a very good introduction into the martial arts world.

SiFu Kul, spent his youth trying many different martial arts from 5-Animal Style Kung Fu to Tang Sou Dao, but there was nothing that he could settle with. It wasn't until Si-Hing Kul was at university when a chance encounter with a fellow Bruce Lee fan, and discussion took place about kung Fu systems and his friend mentioned that there was a kung Fu class held at the university called 'Wing Chun'. Si-Hing Kul went along to the opening night and the demo, and saw was what he felt he had been missing from all the other martial arts he'd tried. But due to university constraints the class couldn't go ahead. So he found a class closer to home; this was with Sifu Terry Escort, where SiFu Kul remained for about 6 months but due to class numbers dwindling the class was shut down.

Back to square one but with the taste of Wing Chun in his blood he set out to find another class. On searching, having found a few classes in the paper, only one that seemed to be recruiting at the time and this was WingTsun. On attending his introductory lesson, SiFu Kul saw how much knowledge his Instructor Si-Hing Chris Wyatt had, and from this point he knew that this would be the path he would be on for a very long time. Si-Hing Chris Wyatt remained Kul's instructor for 3 years, but due to personal development Si-Hing Chris Wyatt to a step back from teaching and Master Damion James, whom Si-Hing Chris Wyatt was the head student of, took Si-Hing Kul under his wing and has been working with him ever since to develop his skills and help him find his feet as an instructor, and in 2005 SiFu Kul opened up his class in Chelmsford and also took over the Loughton class. In his time teaching Si-Hing Kul has taught over 100 people the beautiful art of WingTsun and has worked schools and colleges giving talks and demonstrations and showing how the art works. SiFu Kul also shares a good relationship with the local councils in the towns and boroughs he teaches in, often being invited to have stalls in events.

SiFu Kul's main objective is to offer martial arts for everybody, irrespective of fitness level, gender or any physical aliments'.

In his time, SiFu Kul has attended many training sessions with a variety different masters and instructors.

SiFu Kul has a vision of helping spread the WingTsun Martial Arts throughout the County and with the support of Master Damion James he will continue to develop and promote in the Essex region.